There is probably no section of the state in proportion to population, in which the old settlers are more fully represented than in the Pioneer Club of McDonough County, organized in August, 1905, and now containing a membership of nearly three hundred, whose ages range from seventy to 101 years, and who are excusably proud of the hard fight for the establishment of a splendid civilization in the West through which they have passed and proved no small element in securing the victory. The club originated in the habit of the more aged of the pioneers in the city of Macomb, of meeting before the store of James S. L. Grier for the purpose of friendly intercourse and recounting reminiscences, which naturally often drifted into tales and exchanged confidences of the past. These gatherings became so popular that Mr. Grier placed chairs and settees at the disposal of the old-timers. In July 1905, the press noticed and commented favorably on the disposition of the old settlers to get together and form an animated home historical society, and finally, at the suggestion of Mr. Grier, a group of twenty-four of the venerable fathers of the city and county were photographed. A larger and more representative group of forty-eight was later taken and published by the city newspapers. About this time Blandinsville organized a club (an organization having already been effected at Macomb), and the time seemed ripe to extend the scope of the local association so as to include the county. 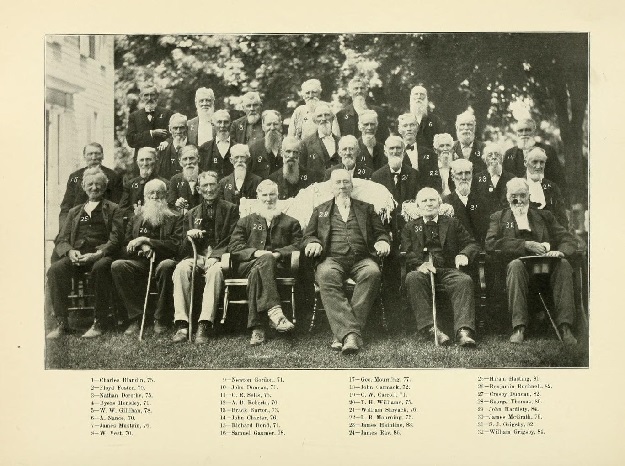 A formal resolution was passed to organize a County Club, and Alexander McLean, E. O. Cole and James S. Gash were appointed a committee to place the movement on its feet, with instruction to report at the next meeting of the City Club. The result was an arrangement with the authorities of the McDonough County Fair, by which August 16, 1905, was to be Pioneers' Day, the old settlers of the county being admitted free and given complete use of the grounds. This was advertised in all the papers of the county and the result was that, on the day named, which proved to be a genial, clear summer day, there assembled in the grove some three hundred men and women, constituting an audience which, in all probability, will never meet again on this side of the River. There were represented the pioneers of this county, who helped to make a part of the imperial State of Illinois--the fathers and mothers, aged from seventy to 101 years of age. Mrs. Mariah Harden Neece was present, aged 100 years. She is the stepmother of Hon. W. H. Neece, who delivered an address on his experience as one of the early settlers, which greatly pleased the audience, as it brought before them the scenes of old times vividly. It soon proved that many who came to this county from 1821 to date were ready and willing to give testimony which would have been most valuable, but from lack of time it was agreed that any one who had something to contribute in that line, by giving a short sketch of his life and labors, be requested to do so, and that it be sent to the President of the Pioneer Club, and that such should appear in the papers of the day from time to time.

The meeting, with Alexander McLean presiding, opened with the grand old Doxology, which was sung by the hundreds present and proved an incident of no little interest. These grand old people voiced with heartfelt sympathy that they had reason to "Praise God from whom all Blessings Flow". After prayer by Elder J. C. Reynolds and the address of Mr. Neece, the exercises were interspersed with singing by the Nightingale Club, made up of old, well-trained singers..Messrs. Gash, Mapes, Grier and Wilson--who selected and, in an admirable manner, rendered appropriate old songs, which were heartily appreciated by the large congregation present.

It was resolved unanimously that the Pioneer Club of McDonough should be instituted and, for the purpose of carrying out the formation of such a club, which includes men and women, E. O. Cole, of Emmet Township, was elected President, and A. B. Stickle, of Macomb, Secretary. This concluded the exercises. All present at once shook hands with Mrs. Neece and the picnic feature was entered into with gusto and pleasure. The entire afternoon was taken up in visiting and conversation. Before the picnic, however, the pioneers present, numbering some 200, proceeded to the amphitheater, and formed in two groups; the women forming one and the men the other. Thus grouped, a large picture was taken of the notable gathering.

Although all residents of McDonough County are entitled to become members of the Pioneer Club, it will be noted that, with one exception, they have passed the "three-score years and ten." 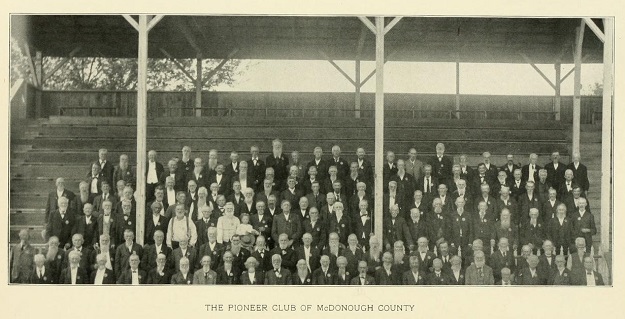 Following is the roll of honor [not as published, extraction in alphabetical order]: